In December of 2018 Taylor was preparing herself for her upcoming enrollment into the WVJC Bridgeport PN program. Before this, she was the traditional college student that went to a university right out of high school without any real plan. When that did not work out, she was left discouraged and worried about what to do next. Then she started hearing about WVJC, did some research, and set her plan in motion. The draw for her was a smaller school and better student to teacher ratio. Little did she know, WVJC would surpass her expectations. 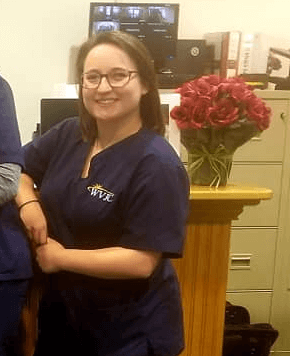 Orientation last December was an eye opener, but in a good way. The instructors were genuinely excited while they were greeting each and every student. It had been a long time since Taylor had encountered someone that was actually excited to teach and wanted students to really learn. The instructors’ excitement was contagious, and she was now more than ready to begin the year – even with the mountain of books, syllabi, online reading material, and homework assignments she had been given.

WVJC continued to surprise Taylor and kept her wanting to learn. They jumped right into classes the first day, and hit the ground running, learning the things they needed to know to function in the future as great nurses. The teaching strategies her instructors used kept her focused. They had lectures where students were encouraged to interact, videos, visuals, and even hands on opportunities in the lab. With all of these things, she could just tell that the instructors had done their research, figured out what worked and did not work for students, and put it into action. Add and check another couple of things off her expectations list.

Everyone knows that nursing programs are difficult. She means they are hard! Not every day has been a walk in the park, but Taylor said it has been more than worth it. There were days that she was not sure how she was going to make it, and she really felt like giving up. That is when the instructors really showed their true colors and helped set WVJC apart from the rest. When she – or anyone else – had their off days, the instructors were right there pushing them. That is a HUGE thing to add to her expectations list and cross it off over and over again. The instructors genuinely care, and that means more to her than anyone will ever know.

Those hard days had really helped shape Taylor. She had no experience in healthcare whatsoever. She was the type to avoid hospitals and doctor’s offices like the plague. Now she’s putting on her scrubs, grabbing her stethoscope and blood pressure cuff, and all but running into the hospital or nursing home for her clinical and externship hours. She feels so much more focused and driven not only to succeed in school, but to be the best nurse she can be. This program has helped her realize she can set her goals and know she is also capable of getting there.

Her externship is something she’s extremely thankful she got to do in the last term. Students have the opportunity to get forty two hours by themselves in a nursing home, clinic, home health, etc. under the supervision of a nurse. She chose to do her hours in a nursing home because, throughout the whole year, she felt like she did not want to go to work in one. Taylor could not have been more wrong about that. She started going in every Monday for seven hours, but now she’s going on both Monday and Friday because she enjoys being there. In the hospital, you can give good care to your patients, but you aren’t able to really get to know them and see them day in and day out. At the nursing home, you are with the same patients each shift, and can really build a good professional relationship with them. It is hard when one of them starts to decline because you somewhat get attached to them. However, she leaves there feeling like she’s really made a difference and helped someone. She has had patients call her a sweetheart, thank her for helping them for just covering them with a blanket, and hold her hand when they are in pain. It has really changed her and opened her eyes to what she want to do. She thinks she was just intimidated from not ever working around that population before.

It has been a completely different experience not having the teachers there as a safety net. She knows the nurse she shadows with would never let her fail, but it is still a different experience not having classmates or the teacher there. It has helped her become more independent and confident in her skills. Taylor has gone from a very scared, intimidated student to being one that wants to jump in and experience anything new that she hasn’t seen. She has her teachers and classmates to thank for that. The teachers are always seeking new experiences for students, and classmates always want to share their experiences with one another. Taylor is grateful for her externship for showing her what she wanted to do after graduation and the type of nurse she want to be. This whole year has been full of growth and learning that has changed her for the better. It has been difficult, but she wouldn’t change a thing about it.  Taylor passed her NCLEX-PN on her first attempt and is working where her heart led her…at a local nursing home.