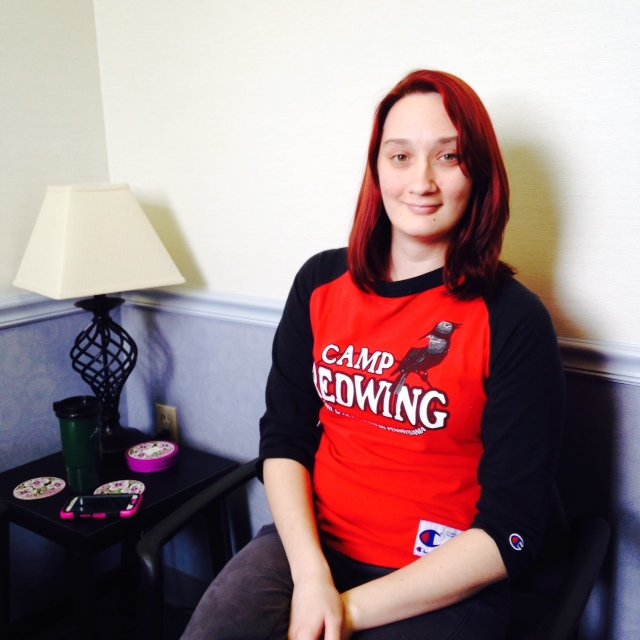 It had never been her thing – showing up to school, dealing with classmates, and everything else that goes hand-in-hand with earning a high school degree.

So when high school graduation finally came, college was the last thing on Cortney Brown’s mind, but five years later, she decided to dip her toes into academia again.

“Since it’s a smaller classroom atmosphere, I was able to do more with my time here,” Cortney said. “I’m a student ambassador. I have a personal relationship with my teachers.”

She added that she feels like that support and relationship helps her to succeed.  The positive experience has led Cortney to believe that higher education is indeed something that she can not only achieve, but enjoy.  She is contemplating continuing her education following graduation from the WVJC.

“The other day, I was thinking back a little bit, what would have happened if I was as motivated in high school as I am now,” she said.  “I was a terrible high school student.  I was suspended.  I was so stressed out.  I lashed out because of it. I wasn’t motivated and didn’t care. I just wanted out.  After taking a few years, I’m more motivated and motivated to improve myself.  Had I had continued directly after school, I would have felt like I had to be there, not that I wanted to.”

In the future, Cortney would like to be a CPA.

“When I started, I thought that I would just come here,” she said. “I’m more motivated now, and I realize that I want an education.”

Cortney is expected to graduate in December 2014, and so far, she said she has a 4.0 and perfect attendance.

“When I applied, I kind-of thought, and was afraid, that it would be high school all over again,” she said.  “But with the teachers being so supportive and helpful, I feel like I have a whole new mindset about college. It made me more self-motivated.”

Instructors agree that Cortney is a driven, motivated student.

“Cortney always engages fellow students and the instructor with intelligent comments and insight into whatever topic it is we’re discussing, “said Holly Hildreth, WVJC Career Management Director and instructor.  “She’s so bright and pleasant. When she told me that she used to get into trouble in high school, I could not believe it. I actually still don’t.  I cannot imagine her as being anything other than motivated and successful.”

Cortney currently works at Wal-Mart. While she isn’t in the classroom, completing assignments or working, she enjoys watching productions by a company called Rooster Teeth. The company creates shows using video games. In July, Cortney is traveling to the Video Game Convention in Austin, Texas, to learn more about Rooster Teeth.

“I like the humor. It’s hilarious, and they do so many different types of things,” she said. “They started from the bottom and are now a huge company. It’s inspiring how they did what they wanted and are hugely successful from it.”

For more information about the WVJC and its programs, visit WVJC.edu.