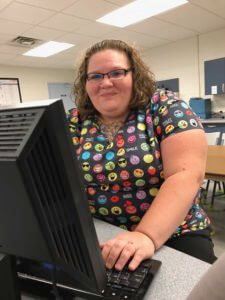 Slena Skeens had been working as a shift manager for a local Dairy Queen for three years. The long hours were tough and meant she did not get to spend much time with her five small children. After hearing her children say that they wanted to work at Dairy Queen like Mommy when they grew up, she immediately tried to dissuade them. She talked to them about the importance of school and making good grades, but they said they did not need an education because they wanted to be just like her. Well, that was all it took for Slena to make up her mind about going back to college!

Of course going back to college brought with it a new set of questions. Where will I go? Will I be able to afford it? What kind of school schedule will I have? Can I really do it this time? All of these things were going through Slena’s head, but she was determined to be a better role model for her children. She had attended Southern WV Community and Technical College for a while and had also done some online classwork through Virginia College. Neither of these options had seemed a good fit for her, so she knew that she wanted to go somewhere entirely different this time.

Having an interest in the medical field, but suffering from a fear of needles, Slena though that an administrative position in a medical office would be ideal. So, she typed Medical Office Administration into Google and hit Enter. The very first listing to pop up was for West Virginia Junior College! After looking at our website she decided to request some more information on our programs. At this point, Slena had no idea how searching for those three little words would change her life forever!

WVJC’s Adult Admissions Representative, Mrs. Kellie Moore, called Slena the very next day to speak with her about our school. While speaking with Kellie on the phone Slena burst into tears. She was just so scared and nervous! Kellie took the time to comfort Slena and let her know that while feeling this way is normal, she really had nothing to be scared of. Going to college is a lot of work, but it could also be a fun, exciting time for her. She invited Slena to come in and take a look around the campus, then they could talk more about the Medical Office Administration program to see if it would be a good fit for her.

After coming in and touring the West Virginia Junior College Charleston Campus, Slena knew this was where she wanted to go to college. The program sounded amazing and she actually felt excited to be starting school again! “The atmosphere felt like I was home with my family; like this was where I was supposed to be.”

Slena began our Medical Office Administration program in August and has never once regretted it. She says, “I have enjoyed all of my classes so far. The Instructors really try to make things fun and interesting.” She also really likes the interaction between students and staff. “Everyone is just so open and friendly. You can talk to them and know they truly care.”

Slena has excelled academically at WVJC and has been on the President’s List for having straight A’s in every session! She says, “All of my President’s List Certificates are hung up on the wall for my kids to see. I want them to know that education is important and that hard work pays off.” Not only has Slena excelled in her academics, but she is also participating in our Work Study Program and is an active member of Read Aloud West Virginia where she reads to children at Flinn Elementary School. As for what Slena’s children think about education now — they are super proud of their Mommy and are striving to make straight A’s themselves!

If you, like Slena, want to set a better example for your children, please contact us here at the West Virginia Junior College Charleston Campus. We would love to take you on a tour of our facilities and get you started in one of our exciting programs! Please call us at 304-345-2820 to learn more. Remember, it is NEVER too late to further your education!