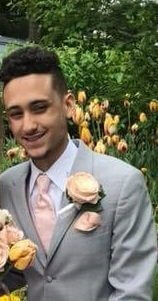 Ronnie Bland is enrolled in the NAS program at the WVJC Charleston campus. He graduated from Nitro High school and decided that WVJC was the best fit for him! Ronnie did not want to go to a 4-year college as he was looking for something smaller and wanted to get a degree quickly so he could start working in his field.

“I chose to go into the IT field because it is good to know how to fix computers, and I believe it is the future.” He believes he chose the best field for him! His idea of a perfect day would be taking a nap, watching a few episodes of South Park and then going to Sheets for Mac n Cheese Bites.

After he graduates, he would like to find a good job in the IT field, somewhere he can grow in and gain experience, then land his dream career.