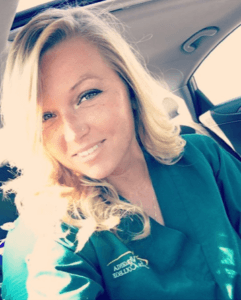 Kelsie Blosser is set to graduate in December 2017 with her Practical Nursing diploma. She is excited to graduate and start her career as a nurse, which has been a dream of hers since she was little. Kelsie attended a few other institutions before making the choice to attend West Virginia Junior College Bridgeport.

Before attending WVJC, Kelsie worked full time as an aid at Genesis Rosewood Center and held a part time job at United Hospital Center. After working long hours and not being happy with the direction her life was going, Kelsie made the decision to attend WVJC’s nursing program. She says, “I felt like I needed to take the next step in my life and go back to school and I just felt like WVJC was the right fit for me.” Kelsie was always told growing up she had the heart to be a nurse. She felt that starting as a Licensed Practical Nurse would be a great stepping-stone toward her lifelong goal of being a Nurse Practitioner.

Kelsie’s says her favorite part about attending WVJC is that “it’s a small enough campus that people know your name, but big enough to make a difference.” When she tried to pick her favorite teacher she couldn’t. Kelsie said Mrs. Wilson and Mrs. Burner have both helped her so much with her classes, and have been very nurturing when the stress of school gets to be too much. A perfect day for Kelsie is one where all of her homework is done and she doesn’t have to remediate on a test.

After graduation, Kelsie is hopeful that she will become a nurse in the school system. This would be a great fit for Kelsie due to her compassion toward others and love for children. In five years, she hopes to be finishing school to become an RN and to have begun a nurse practitioner program. All the staff at WVJC has great hopes for Kelsie as she prepares for graduation and begins her career as a Licensed Practical Nurse. Kelsie lives by the quote “She is clothed with strength and dignity and laughs without fear of the future.” As she moves toward graduation, her future looks bright.

For important information about the educational debt, earnings, and completion rates of students who attended this program CLICK HERE.